One summer my niece and I went on a pond tour hosted by the local lawn and garden club.  The Pond Tour consists of people who are gifted in all things aquatic and horticultural (Warning:  Big Word Day) to open their back yards, front yards, rock gardens, and water gardens up to the public to tour.  Hence the name:  Pond Tour.  Come on Angel, don’t make this harder than it is.

I was instantly enamored with ponds.  So I had to have one.  My husband, who hates all things aquatic and horticultural, except for wheat and hay and windmill tanks, was not agreeable.  If I recall, the conversation went something like this:

Me:  (sweetly) (batting eyelashes)  Honey, I’d really like to have a pond.  And I’ve thought about it, and I think it would look really great right here next to the fence.  And I’m going to put some green plants around it, and ivy, and we can have some Koi fish in it, and rocks around it, and lily pads.  All I need you to do is dig it out, lay the liner, run the water lines, and arrange the rocks.  What do you think?

Okay, I exaggerated the bleeps.  There were only 3.

Or maybe only 2.
Or really none.  But the truth is he did think I was nuts.

To make a long story short, I don’t have a pond.  But much like the wizard who couldn’t grant brains and courage but rather diplomas and medals, Jason granted me what he could.

I don’t have a pond, but what I do have, is a whiskey barrel (which was extremely hard to acquire and my sister had to bring it all the way from New Mexico, and by the way Jo, your checks in the mail for that, thanks!), a pump, and two goldfish.  It’s just as good as a pond, maybe even better.
It’s called “a water feature”  Doesn’t that sound better than a whiskey barrel?  And it won’t be on the pond tour anytime soon. 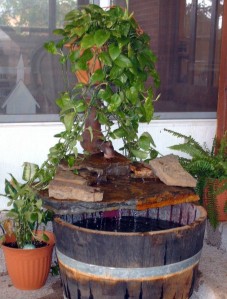 We started out with four itty bitty goldfish. One died of shock. And one died from being sucked up the pump and spit onto the rocks in tiny bits of fin, scales and eyeballs. So only two remain. Survival of the fittest, that’s what it’s about. These two survivors must be of the same sex because we’ve never had any offspring, or if we did they feasted on them.

Once my bratty sweet nieces commandeered my camera and took quite a few poses.  These were among them.

We’ve had these little goldfish for a couple of years now. And I’m downright proud of that fact.  We bought them a submersible heater for the winter months.  We remember to feed them everyday.  They’ve become a part of our lives.  I might even go so far as to call them fishy members of the family.  Well, they were fishy members of the family.
Right up until this last winter storm came through.
And their heater broke.
And their whiskey barrel home froze over.
And anguish filled my soul, fear that my fish friends had froze . So Jason put on his snow boots and treaded out to the walmarts to buy another fish heater.  He broke through the 1/2 inch of ice to put it in.  But was it too late?   Did their little cold-blooded selves freeze to death?

This morning the great melt down has begun. 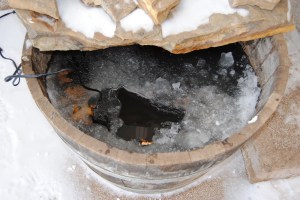 With trepidation, I peered into the whiskey barrel.

A little closer.  That’s a leaf on the right, not a belly up fish.

I dug out some ice and looked a little closer.
Lo, what dost appeareth before mine eyes?
Could it be?  A slight movement of a fish?  Why yes, I do believe it is.
Both fish are alive and swimming.

Survival of the “fishes”, that’s what I’m talkin about.