Here’s a second story from my dad.  This was dated January 27, 1996.  It is called Marking One’s Progress Through the Ages on the Doorjamb of Life.  He had celebrated a birthday 11 days prior. 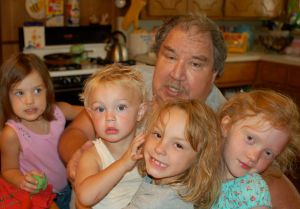 As I write this I reflect back to the 16th of January.  That was the day that I turned 53 years old.

For lunch I had a fine piece of catfish, cornbread and fried potatoes, and a mess of turnip greens.  A slice of key lime pie completed the repast, what more could one ask for his birthday meal?

Remember how you loved birthdays as a child?  The presents and the birthday cake.  The thrill of having one day that belonged to you alone.  All this helped to make a wonderful anniversary.

Perhaps the most thrilling was the fact that you were a whole year older.  You had the inch to prove it too.  You stood there proudly, at attention, while your mother marked your progress on the door jamb.  You were inching up on your older sister every year.

Ice cream was the “piece de resistance”.  It was made from real hen eggs and cow’s cream.  They don’t make ice cream like that anymore.  It sat there in a big wooden freezer packed with ice and salt.  A huge layer cake waited there in the background, the multi-colored candles just waiting to be lit and blown out therefore making your wish a cinch on coming true.

But what happens to that pride in growth as we add 40, 50, or even sixty years?  We still lap up the kudos and cards from our friends and relatives, but we make as little fuss as possible over the number of years.

Birthdays are really very traumatic experiences.  Today’s accent is on the young.  Looking, acting and dressing the part make more than a few of us older than our years.  After a fine bite of catfish and cornbread I can almost pull it off too.  So instead of trying to submerge the past, there are those of us that try to preserve and respect it.

It is said that the most catastrophic birthday that we have is the one on the day we are born.  Up until now no one has recorded the innermost workings of a newborn babe’s mind, and that is something that will have to wait a few years before being documented.  They also say that the 40th is the big bombshell for women.  I wouldn’t know about that, but even now on my 53rd, I’m not yet ready to throw in the towel.

So today I feel good about turning 53—despite the sad state the world we are living.  Each new birthday becomes an achievement for me.

I wonder if our lack of pride for middle-aged birthdays is because we have forgotten that we are still growing.  As each new season passes we have a new set of memories that make us more tolerant and sympathetic toward our fellow-man, and surely we should be for adding another inch of spiritual growth, it is the most important of all.

On my most recent birthday I’ve had a year’s worth of memories, ordinary, yet beautiful to me.  I’ve also had unhappiness, but part of my growing process is learning that no one can grow without his own fair share of unpleasantness.  The lessons I have learned go a long way toward that old saying, “when the going gets tough, the tough get going.”

Each birthday adds to my ability not to worry about mistakes that I might have made during the past year.  next year I’ll try to remedy them, and if they can’t be fixed, so what?  I won’t dwell on them.

The only birthday that I won’t be proud of, is the one where I back up to that spiritual door jamb and find that I haven’t grown an inch.