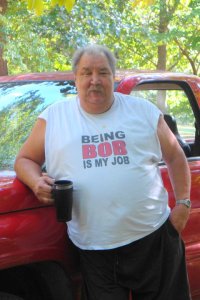 Today it has been two very fast weeks since my dad’s death.  I’ve been doing okay, I really have.  My loved ones (and his) have been grieving something fierce, and I’ve been worrying about myself because I seem to be living life just like before February 27th.  I ponder if I’m giving myself time to grieve, if I’m dealing with this like I’m supposed to?  Of course he’s the first thought I have when I open my eyes, even before I begin deciding what day it is, and he’s the last thought I have before I fall asleep where I long him to visit me in my dreams.  He only has talked to me once in my dreams, and he told me he had to go alone, that was pretty much it.  The rest of my dreams have been busy planning the funeral and such.

A few moments ago,  I literally collapsed on the couch with exhaustion from packing, moving, and unpacking my home.  My body is weary and my mind is exhausted, and my little niece who was busy cleaning out her clothes came into the room holding a tee-shirt her Grandpa had bought her.  You know one of those “Someone who loves me very much went to blah blah blah and all they brought me was this lousy shirt.”  Holding it against her chest, she said, “auntie, I have to save this even though it’s too small for me.”  That’s when my eyes welled up and the hurt returned.

I know I’m going to have days like this.  I know when my mind and body slow down enough, it will hit again.  I’m thankful for my busy-ness right now.

Thursday I celebrated my birthday and that evening I blogged about my age, and the question of middle age.

Ironically here’s a story written by my dad on the same subject.  Enjoy.

~Trying Not to be Caught in the Middle ~

“Good God, brother, you walk like an old man, what are you 54, 55 years old?” my brother groused as I creaked and groaned my way to my feet.

“Whatever it is, you’ll be there sooner than later,” I told him and made my way to the fridge for a refill.  You’ve go t to give as good as you can take in this day.  And I keep my needle honed for jibes such as these.

Middle age–why do they call it that?  Because we often find ourselves in the middle.  Too young to enjoy the quiet pleasures of the aged, but too old to handle the excitement of the young.

Some wise old sage (I think it was one of my friends) said, “Youth is wonderful, too bad it’s wasted on the young.”  I concur.  It’s too bad the young don’t possess some of the mellow qualities their elders have in abundance.

Three score and 10.  that’s what we’re allotted, and if those figures are correct, then I’ve by-passed middle age and no one even told me I was ever there.  Someone once wrote, “If you pass fifty, be on your guard against impulses, which if obeyed, can lead along a perfumed path to folly and incalculable risk.”   The only impulse I suffer from is to take a nap in the afternoon, and the sooner after lunch, the better.

Having lead a rather active life between the years of one and fifty, and having acted on many impulses, I’m curious as to what the next few years might bring.  Because if I’m going to make a fool of myself, at least I’d like the opportunity to pick my own gig.  So I’ll play the proverbial grasshopper waiting for whatever.

With the life expectancy being increased daily by the Abflex, people can expect to live to be a hundred by the next century.  Then, by the simple ciphering of numbers, middle age will come at the relative young age of 50.

A friend recently told me, “I’m in the middle, I have too much energy to sit still and not enough energy to move about.”  Then waxing philosophical he added, “You’re as old as you feel.  That’s as plain as your face!”

“Don’t you mean, as plain as the nose on your face,” I asked.

In respect to his age and mine, I didn’t pursue the matter any further.

So to those of us that have reached middle age, we may as well yield to it and become synchronized with the years.  You can’t kid the calendar.  Be prepared to agree with the fellow who insists that there must be some pleasure in senility.  Maybe after all, age is just a mirage to those of us who no longer have youth in great abundance.  But I’ll struggle, struggle against growing old.  Because the longer I stay young, the shorter I’ll be old.  Anyway you look at it, it’s time to take my nap.