We’ve all seen the magazine pictures.  The quaint farmhouse set on a hill with rolling green meadows and white rail fencing.  We imagine the serenity, the peace that we could experience if we could just get away from the city.  The hustle and bustle, the horns and sirens.

But put a trailer house out in the middle of the windy, hot, dusty, dry Texas Panhandle and you get a whole ‘nother atmosphere.

Yesterday Manic Depression plagued me.  My neurosis of the day for June 7 is Fear and Anxiety.  Really I was doing just fine until the snake incident a couple of days ago.  Now I tiptoe gingerly everywhere I go.  If a feather breezes across my path,  I jump a foot.  And then there was the fire today which set me into a nervous dither.

I was piddling about the house this morning wearing an apron.  Well not JUST an apron, but an apron over my clothes (hoping that would inspire me to clean) when I began to hear sirens.  Weird with a capital W.  I glanced out the window and saw a couple of firetrucks whiz by which caused an elevation in heart rate due to the fact that we are in a major drought with wind gusts upwards of 40 mph.

More sirens, more window peeking.  I then decide to go outside so I can see what is happening on the highway that runs parallel to my house.  The sky is dirty. It could be dust or it could be smoke.  The traffic slows and then stops from both directions.  A highway patrol passes.  A Department of Transportation vehicle passes.  It could be a wreck or it could be a fire.   I make a few phone calls, to my Sister-in-law who has a scanner but knows nothing, to the Sheriff’s office which confirms a fire, but mostly panicked pleas to my husband’s voicemail.  In a matter of a very few minutes I contemplate how I’m going to get my dogs and my chickens evacuated, checking off a list of important items to grab:   i.e. computer hard drive, a few photos, my wedding ring, and my husband’s handmade cowboy boots.   And then decide in order to quit worrying, I’ll just go right to the source, so I walk across the road to where the nearest fire truck is parked and question the fireman if I indeed need to be calling my insurance company within the next half hour.  I was reassured that everything was under control and my biggest problem would be getting back across the highway since they have now released the traffic.  So I did just that.  I darted across the highway and thanked God for his mercy.

I’m piddling around the house, this time without an apron, when my husband says, “I’m going to do chores.”

Chores around here consist of feeding and watering horses and dogs.  I’ve got the chickens set up to only need care about once a week. 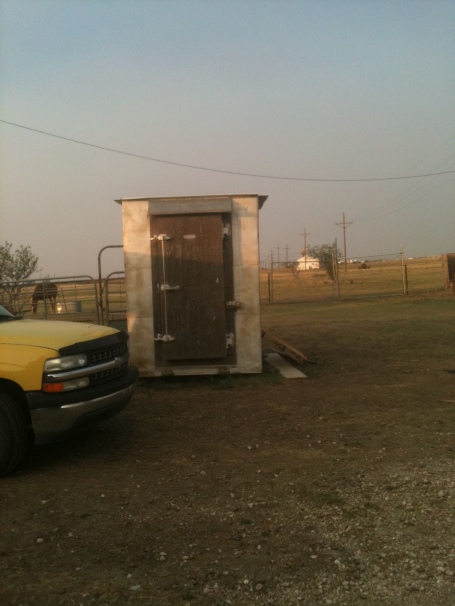 This is an old walk-in cooler or something that was here on the place when we bought it.  Yes, it’s an eyesore, but so is everything else around here so we’ve come to love it.  Plus, it makes a very efficient feed room.  Rats and mice cannot enter and it’s just the right size to store all the sacks of feed and buckets necessary.
J-Dub and I go out and began our evening chores while our two dogs Drew and Grace follow along, searching and sniffing.
Suddenly, I notice Drew is very intent on smelling underneath the “feed room”.  I call to him and he ignores me.  I’ve seen him sniff out a possum from under a porch before and he is in exactly the same stance and frame of mind as the aforementioned possum massacre.  I call to him again.
“Leave him alone,” my husband tells me.
“There’s something under there,” I answer.
By this time, our other dog Grace has joined Drew in the excited sniffing and smelling escapade that is taking place.
“It’s probably a rabbit,” says Jason, “Let them be dogs.”
When all of a sudden, the body of the something that is under the feedroom comes into view.  And once again, for the 3rd time in about 3 days I get to see yet another snake.  Only this one is a behemoth, a mammoth, curled under the “feed room”.  My husband begins his investigation of the kind of snake lurking and I begin my departure.  Slowly backing away and taking the extreme long way around.  After my husband throws a rock at it, to get it to move so he can see it better, I hear this sound that can only be a rattler to the untrained ear (mine).
“It’s a rattlesnake!” I exclaim.
“No it’s not.  It’s just a bull snake.  He’s opening his mouth and hissing as me,”  my husband informs as he is hunkered down peering under the feedroom.
And then it was over.  The dogs were called back into the yard, my husband continues his feeding, and I am about to crawl out of my skin.
My husband doesn’t kill bull snakes.  My husband only kills rattlers.  Bull snakes are “good” snakes if ever a snake were to be found.  They eat rodents.  They’ve been known to eat rattlesnakes.  They eat chicken eggs, but never mind that.
Fear grips my body as the realization that I am living with a den of snakes, one of which is likely the mother to the other and has hatched a whole passel of eggs, and will continue to do so.  And there’s nothing I can do about it seeing as how hard a time I had killing a baby one.
Acting as calmly as possible, I carry on a conversation with J-Dub as we water the yard.
“So, that snake bites, yes?”
“Yes, but it’s not poisonous and it won’t bite unless you’re provoking it.”
“So,”  I pause, “do you think the snake lives there permanently?”
“No, he’s probably just shading up.”
“Okay, so he’s just visiting.  So, how often does he need to eat?” Concern for my chickens erupts my thinking.
“I don’t know.”
“So, tomorrow morning, if I open the door and he’s curled up on the porch, I’m supposed to just step over him?”
“No, he might bite you if you step over him,” I’m calmly informed.  “Get a broom and push him off the porch.”
“Okay, what if he coils up and hisses at me like he just did you?”
“Just get something long enough and push on him, he’ll slither away.”
And then I got the Augustus McCrae quote from Lonesome Dove, “You’re  going to give yourself the drizzles if you don’t relax.”
Excuse me, but I have the sudden urge to go the bathroom.

11 thoughts on “Peace, Quiet, Serenity, and other lies of Living in the Country”