In my last post, I shared with you a picture of a snake who was close enough to crawl up my skirt, if he’d taken the notion.  Thank Goodness, he didn’t.

I received a comment from  my dear, sweet Aunt Bert asking if we killed it or am I learning to live with them?I didn’t answer her comment because it’s a complicated answer which involves more explanation than a yes/no can give.
I must begin at the beginning, which is a very good place to begin.

My snake sighting number is at a total of 4, plus one molted (do snakes molt) snake skin.

When we bought this place, we discovered a snake skin and my wise dad commented “if you found a snake skin, the owner is around there somewhere.”  I didn’t completely ignore him, but I imagined surely the snake had moved on to greener pastures.

The first snake I saw, I killed with no less than 50  whacks of a shovel.

The second snake I saw, was a tiny little baby snake that got away. 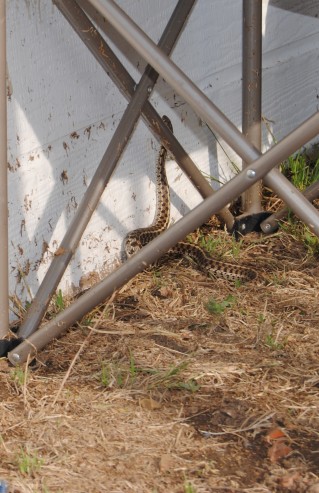 And the fourth snake I saw was coiled under a tree hissing and striking at my dog AT THE SAME TIME the other snake was crawling up my skirt. He wasn’t in the mood for a photo shoot.

Each time a snake slithers past, I do a triple-step-bunny-hop, scream like a girl, and get the shivers all at once.  Then I dash in the house to call my beloved, my knight-in-shining-armor, my hero, who inadvertently is 30 miles or more away and lets out an exasperated breath on the other end of the line.

With the exception of the first one that I hacked to death, I leave them alone, they stay around for at least AN HOUR AND A HALF while I become a PRISONER in my own home, afraid to leave the comfort of my air-conditioned living room, peeking out the curtain every 10 minutes, watching their every move, and eventually they slither away to places unknown to me, and I live in a state of anxiety and trepidation until the next encounter.

Now J-Dub and I have a pretty decent marriage going on, but the snake incidents have just nearly driven us to the divorce attorneys.  And I jest not.

I want the snakes dead.  And He doesn’t.  His argument is they are harmless, they eat rodents which carry nasty diseases, and “people” claim they keep rattlesnakes away as well.  They are good snakes and I should just leave them alone.

My argument is they give me the eebie jeebies.
I think my argument wins.

Realizing he is not going to come to my rescue when I see a snake, realizing that I’m going to see more snakes, realizing that 50 whacks with a shovel will only kill a little snake, I asked him to show me how to shoot a gun.  That statement led to a  fight, which led to me leaving the house for a couple of hours until tempers cooled and rational thinking returned.

After a couple of hours away, and a couple ice cream cones consumed, I returned to the Snake Spa, where all snakes come to bask in refreshing coolness and safety of a mostly yellow, but half-green yard.  Come one, come all, enjoy your stay!

As I was driving up, I flicked on the bright lights and observed a dead snake in the road outside the driveway.  I walked into the house and the conversation was as follows:
Me:  Who killed that snake?
J-Dub:  Who do you think killed him? I shot the poor bastard!  I drove him out from under the feed room.  He tried to get away, but I killed the poor bastard anyway!

A couple nights later, we saw a coyote running across the pasture with the poor bastard hanging from his jaws.

And ever since the poor bastard’s been killed, I haven’t seen any of his wives, sisters, brothers, daughters, sons, or cousins twice removed.

I since have been given a pistola and 2 bullets of rat shot and I’m not afraid to use it.  Well truthfully, I’m terrified to use it.  Probably more terrified than seeing a snake. So to the next bull snake that slithers into the yard:  I’ll just do a triple-step-bunny-hop, scream like a girl, get the shivers and run to the house.  You enjoy the coolness of the grass for 90 minutes, AND NOT A SECOND MORE, and then be on your way.  Or there’s going to be trouble.  Ya hear?

So Aunt Bert, I hope that answers your question.

On our anniversary, while we ate our tender steak and tough corn, I told my bull-snake loving husband about a friend on Facebook who has a State of the Marriage Address each year on their anniversary.  They discuss how things are, what needs to be improved, and the overall state of their marriage.  We both agreed that life was going pretty well for us and our marriage was strong.  And then he added “Except I need to be more patient with you adjusting to living in the country.”

I’m Angel, a.k.a. Rocket Surgeon, and these are my chronicles. I love writing and I believe our stories should be shared, so here you’ll find anecdotes of my life, loves, worries, fears, joys, and experiences. I blog about my mishaps and adventures as a wife, mommy, auntie, wanna-be writer, teacher, Texan, country/city/mountain girl, cereal killer and Jesus-freak. A few things you might discover about me: •Jesus is my everything; without Him I am nothing, but with him I can do all things •My family makes this world a better place for me to live in •I adore chickens, the live ones, although the cooked ones aren’t too bad either •I have 2 dogs: Grace and Ozzie. And one cat: Rocky Muffin •My dream job would be to raise chickens and write best sellers Thanks for stopping by. Kick off your shoes and stay awhile. I know your time is valuable and I honor you for spending a few moments here with me. I hope you find something to brighten your day, lighten your load, make you chuckle and remind you of the good in the world. “When you look for the bad in mankind, expecting to find it, you surely will." Pollyanna I’m always eager to meet new online friends, so leave a comment and introduce yourself. View all posts by Angel