We are officially on the countdown.  Tomorrow we hit the 39 week mark.  Only one more to go.  Maybe.  And I am pleased to announce that I have finally crossed over into the land of excitement.

We went to the doctor yesterday for a sonogram and a check-in.  While I was working yesterday morning and anticipating the idea of seeing her face, I became overcome with joy and excitement.  As I laid on the sonographer’s table, I imagined a little face that would look exactly like the one we will behold in just a few more days.  How lucky we are to get a sneak peek.   The sonographer lubed my belly up and began rolling her wand around as we gazed at the screen.  We saw her kidneys, her bladder, the umbilical cord.  We heard the heartbeat and saw the blood flowing through the veins and arteries of the cord.  We discovered that she is head down (locked and loaded) as I like to call it.  She is estimated to weigh 7 lbs 11 oz, but that estimate can be off by a pound either direction.  And then the sonographer rolled her wand on her face.

I would love to show it to you, but she doesn’t like having her picture taken.  Her hands were covering her face.

Here is a side profile we got with her hands as the big blob in front.  That is a beautiful eye though, isn’t it?

I’m beginning to think she might be a stinker.  When we wanted to find out her gender, she didn’t cooperate by keeping her legs crossed, now when we’re dying to see her face, she decided to play peek-a-boo instead.

So the sonographer applied this vibrating buzzer to my belly to try to scare her, and when she finally moved her hand,we got a picture of her.  However, my dreams of seeing a beautiful baby vanished.  I can’t tell whether she looks more like an orangutan or Mike Jagger.

It’s the nose.  And the lips.  Some wise people I work with told me she’s all smushed in those tight quarters and it can’t be an accurate picture.  So, tonight I stood before the bathroom mirror and I smushed my own nose to compare it with hers.  Then I made my husband smush his nose.  There we sat staring at each other with our noses smushed flat trying to decide whose nose she has.  I’ve decided she has Mick Jagger’s.

Remember, we have no TV here.  This is what people with no TV do.

But look at these older pictures.  They were taken on the same day back in October. 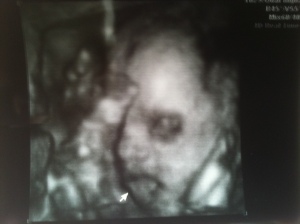 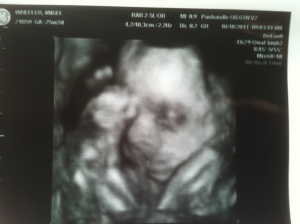 When we saw the doctor yesterday, we were pleasantly surprised to discover I am dilated 2-3 cm.  He said it could be any day now.

And so we wait to meet our little girl.

And she’ll be beautiful.