Ah, the joys of moving.  I’m in the middle of moving to a new home, which means a whole lot of cleaning, throwing out, organizing, donating, uncluttering, and packing.

I’ve tried to organize the process and do a little bit in a certain area each day, and so far I’m about 5 days behind schedule.

I’m not sure why story books and cartoons portray mice as such cute critters.

If you ask me, there is nothing cute about a mouse.

They’re dirty, they’re nasty, they scurry about leaving those little mouse turds behind.  And I just got the shivers, no lying.  In the cartoons, they always have a cute little face and live in a  tidy little mouse-hole with a rocking chair and an afghan.  Maybe a little table and a few chairs formed from old thread spools they’ve collected.  Mama mouse wears an apron and daddy mouse usually dons a vest with a pocket watch with a pair of spectacles resting on his nose.

But that’s Hollywood or Walt Disney and certainly not an accurate portrayal of the rodent which I hate.

Living in the country, mice are pretty inevitable.  I mean, really I’m living on their turf out here in a big open field.

Not too long ago, I blogged about my mouse troubles here.  And how I went about getting two little kittens from my mom’s to help ward off the mice.

Well, I think they are doing their job. 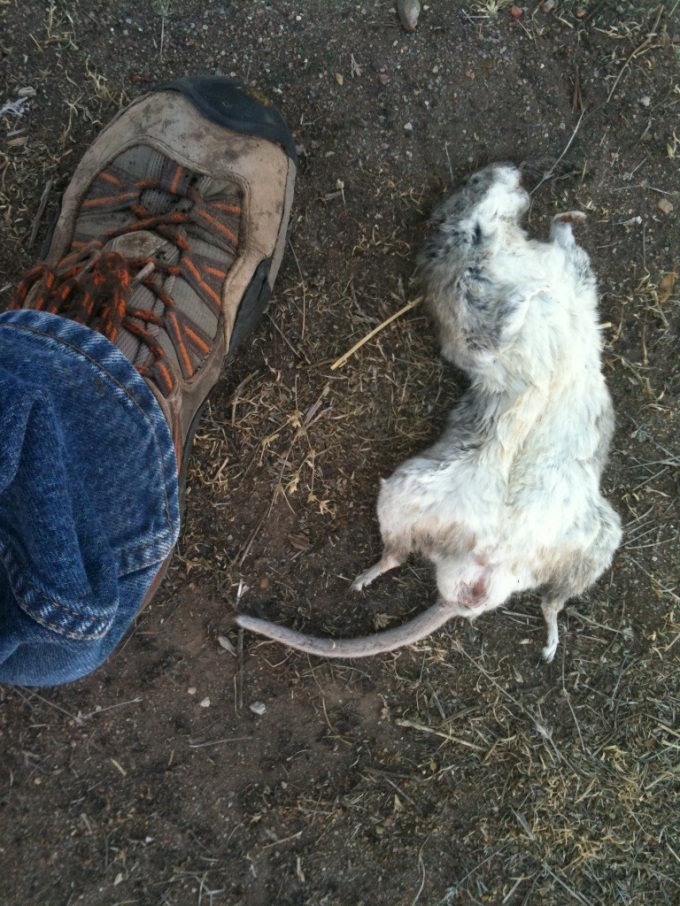 This is the gross of the grossest, I know.  But this rat was lying dead in the drive the other day.   J-Dub doesn’t have a gigantic foot by any means, but nonetheless that is one big dude.

Funny, I don’t see his little pocket watch or spectacles.  This isn’t one of Cinderella’s little helpers is it?  More like Templeton from Charlotte’s Web, who is the accurate depiction of a true rat. A  nasty, fat, filthy varmint.  A dead one, at that.

So kudos to the cats.

Or the sudden acute coronary thrombosis that took his life.