It happened yesterday.  The end of an era.  But yesterday was a joyous day of remembering the birth of EK, that I couldn’t allow it to spoil the day, regardless of how sad I felt about it.

I found my last one chicken dead yesterday shortly after dawn. Actually, dead is such a mild word when what I really mean is murdered.  Viciously attacked by a raccoon I am sure.

The chicken herd had been dwindling by about 3-4 chickens a year due to various causes of death.

I had my last two remaining chickens, one yellow and one black and white, for a good long while up until around Thanksgiving.  That’s when I found the yellow one eaten in the yard.  The dogs had been brought inside for the night, so there was no protection for them so I wasn’t sure what had happened to the chicken until the next night when we were awakened by a ruckus.  Drew Miller, AKA Killer, stayed outside and engaged in a terrible brawl with a raccoon.  JDub woke, put on his slippers and witnessed the entire battle royal, attempting to stop it but failing.   Drewby Doo gave that coon a run for his money as the coon did Drew.  Drew has some fresh new scars on his snout to prove it.  We surmised by all this, that the raccoon more than likely killed the yellow chicken while the dogs were inside the night before, then came back for more the next night, only to be caught off guard by the dog.

A couple of months have passed since the death of Sassafras.  In that time Drew and the black and white chicken, Freedom, have become the best of friends.

It was as if Freedom knew Drew, and only Drew had and would save her.  If you’ve been a reader for long, you’ll remember Freedom the chicken.  If not, you can read about her here and here, among others.  I’m not entirely convinced it was Freedom as I never tied a string around her ankle or anything, but in my heart I believe it was.

Two nights ago, I was driving home after dark and I saw the raccoon.  Big as a bulldog crossing the road at the river just a half a block from our house.  He must have forgotten the whoopin’ Drew gave him, and luckily for him Drew was inside for the night.  But unluckily for Freedom.

I sat with Freedom the day before she died.  I sat in a lawn chair and she jumped up on the arm and I stroked her and she pecked my shirt, making me all kinds of nervous as she always did.

They brought me delight, truly they did.

I hope there’s a chicken heaven.  If there is, my girls are there.  May they be ever happy in a land of green grasses and big worms. 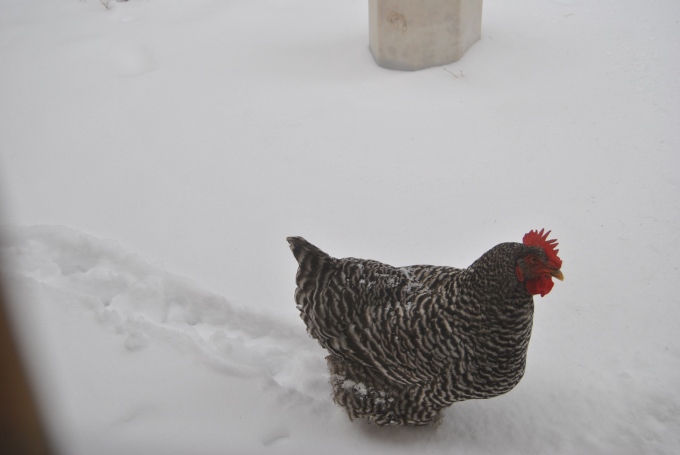 6 thoughts on “The End of my Chicken Ranching Era”