My 5 year old had her heart set on a Halloween costume that she found in a catalog chock full of high end costumes that she had discovered from my mom’s house.  The costume was a leopard with all the fanciness you can handle with a full twirly black skirt, faux fur gloves to the elbow, and  spotted ears. Of course, it cost a small fortune. I dare wager a kidney transplant might be cheaper. I kicked my honed parenting skills into high gear and attempted a persuasion technique where I could distract her by finding a much cheaper version of pretty much the same costume. I’m dealing with a five year old, this shouldn’t be hard.

No other leopard costume that we searched out would suffice. It had to be this one and only this one. I might have to take out a loan, but by gosh this was the costume.  I dragged my feet for a couple of days. By the time I logged back in to place the order, lo and behold, it was sold out.

What to do, what to do? Surely another costume will work since there’s just no way around this problem, so I tried my persuasion technique again, searching the inter web high and low for suitable substitutions to no avail. I was only greeted with crocodile tears and a stubborn streak a mile wide. Nothing else would do. No other costume on the planet was as good as that one. She only ever wanted to be this leopard. Only this one with the full twirly black skirt, faux fur gloves to the elbow, and  spotted ears. So I did everything in my power.

I contacted the company: Will you be getting item #34756389 in stock in a size 5 before Halloween?
The answer was no.

What to do? What to do? She would just have to face the music. The costume was not to be had. Disappointments are part of life, she had better learn to deal with them now, right? When she was told we would have to find another costume, more tears ensued.
At this point, I was a bit exasperated. I advanced my parenting skills from persuasion to guilt. It sounded something like, Do you have any idea how ungrateful you’re being? Do you know there are children out there who would love to get a new costume? Or to even get to go trick or treating?  To dress up as anything even remotely interesting? And here you are, with a play room full of princess dresses, and various and a sundry other accessories and yet all you want is this one and only danged old leopard costume. Do you see how spoiled your acting?

Tears and more tears. No other costume would do, it was decided. It was this costume. It had to be this costume. The one that was sold out and wasn’t coming back.
What to do, what to do? I’m no rookie. At this point, I upped my ante of parenting skills and decided to throw in a little reverse psychology. It sounded something like, Well then fine, you can just not go trick or treating. You can just stay home and hand out candy.

This technique blew up right in my face when through her big old tears, she said that was just fine with her.

I should have quit right there. I should have waved the white flag. But she comes by her stubborn streak honestly. I couldn’t in good conscience allow her to stay home and not trick or treat when she is only five years old! They grow up so fast. Trick or treating and costumes are such a blink in time. The mommy guilt reared it’s ugly head full force. I took a deep breath, let some days pass, and suggested we should look on Pinterest for a costume idea. Good ol’ Pinterest. She agreed to this idea. We pulled up Halloween costumes and she found one she wanted. The Poop Emoji.

It took some doing, but we got it done. A shirt, a little brown tulle, and wa-lah! She was the gosh darned cutest turd I’ve ever seen. She won second place in her school’s costume contest for most original Costume and she was a hit among those who were savvy enough to know what she was. We trunk or treated and trick or treated until she said she’d had enough. We turned on the light and she handed out candy for a few straggling kids.

I held her in my lap when the day was done, candy wrappers strewn, costume in a wad on the floor, chocolate on her face. You’ve had a good day. I told her. You had a great costume too. And wasn’t it better than that danged old Leopard costume?

She looked at me and said, “I had forgotten all about that!!”

That’s when I cried.  Tears and more tears.

She’s already decided on next year’s costume. And it’s not a dangled old Leopard either.  So make sure you stop by my house, because after this experience, this little turd will be home handing out candy.

Months ago, I mean months ago, I saw a darling handmade owl costume on Pinterest.  You know Pinterest?  That website that will suck the hours right out of your day?

I pinned it on my board entitled Possible Attempts.

Around September, I knew I needed to get started, so I gathered the felt and began the process of cutting out owl feathers.

But that’s how it all came down.

Our town had a fallfest carnival the weekend before Halloween.  I was ready with the owl cape and hat.  I’d bought sweats to go underneath it.  She had glittery boots.  Glittery boots!

And she refused to wear it.  She threw her arms back throwing the cape off like it was burning her flesh.  If I managed to get it put on, she tugged at the neckline, crying and fighting. 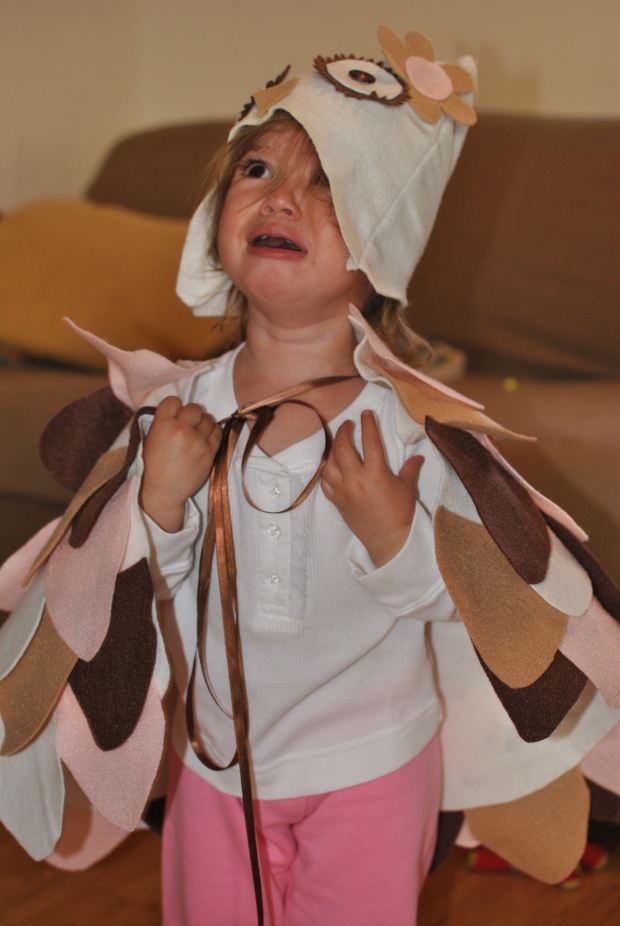 I decided to give up, and I carried her costume around the whole time.

The only time she put it on was in my lap and we managed to get a couple of pictures of her on a hayride with me.

That was the Saturday before Halloween.  I decided to revise the costume and added a button, thinking maybe the tie was a little too choking.

I was up for another attempt.

I noticed a few years back that Halloween lasts a week these days.  When I was a kid, Halloween was on October 31, no matter what.  But this day and age, if it doesn’t fall on a weekend, there are Halloween events the weekend before and sometimes the weekend after.  You’ll even find churches participating on Wednesday night, no matter what day it fall on.  Then there is, what I call, “Real Halloween”  the day people actually dress up and go trick or treating.

Attempt #2:  On Tuesday, she wouldn’t wear her costume.  I kind of threw a fit, but not as bad as the Saturday one I threw.

Attempt #3:  On Thursday, I didn’t make a big deal out of it at all.  I just merely asked if she wanted to wear it, and lo and behold, she did.  So we donned the owl for Library time and she kept it on most of the time.

She was so tired after that, we didn’t do anything else for Halloween, which was fine with me.

I bought some Twizzlers for the trick or treating crowd, but ended up not having any trick or treaters.  I might have, but I had to turn my light off at 7:30 after Ashlynn came in with a church group in the big middle of a scavenger hunt and took all our candy.

I guess I can’t complain since I did get a couple of decent pictures, although no smiles.

Even though we didn’t get to do “Real Halloween” and got trick or treat, I bet you can still guess “whoooooooo” was the cutest owl in town?