So, occasionally I like to blog about the funny things that come out of my daughter’s mouth.  Today, I’m keeping it short and sweet with the latest three funnies.

1)  She’s learned how to covet.  Something she often says is “I wish I had ____________(fill in the blank)”.  The other day while looking at Pinterest with me, she said “I wish I had that dress.  In my dreams.”  Maybe she’s realizing she doesn’t get everything she wishes for.

2)  The sun was shining last Saturday, so we headed out for a hike in the woods.  Although most of the snow had melted in town, we discovered a lot of snow, mud, and puddles on the trail while heading up.  Needless to say, I hadn’t dressed her in the best shoes for trekking through the aforementioned conditions, she was simply wearing a pair of “sneaks” as she calls them.  She was doing a great job hiking however; no complaining, no stopping, no slowing down when she fell in the snow.  Her daddy was bringing up the rear and commented, “Emma, you’re a trooper.”  She replied, “No I’m not!  I’m a hiker!”

3) She spent some time with her young male cousin recently during all the holiday visits. Today, while going potty, she informed me that “Maxx pees out of his belly button.  Silly Maxx!”

Oh the fun of it.

You can read her other cute sayings here and here.

I’ve got this almost 3-year-old, going on almost 30-year-old.

She says some of the funniest things.  I posted about them last here.  One of my faithful readers and commenters, Donna, coined them Emmaisms and I thought that sure sounded catchy.

Today I put on my 80’s playlist to get myself moving to clean the house after the holiday storm that rushed through here a few days back.  Trying to get back in my groove.  I began singing rather loudly to Journey.  You know how you do whenever Journey comes on. It doesn’t matter where you are, or what you’re doing.  When Journey plays, you sing.  It was a little bit of  Separate Ways.   I was belting it out pouring her some milk.

Someday love will find you, break those chains that bind you.  One night will remind you…….

Emma looked at me and said,

“Mom, let them sing by themselves.”

She lives in a fantasy world most of the time.  Princesses and fairies.  She takes turns wearing her dress up clothes with the matching shoes and hair.  Yes, hair.  If she’s Elsa, she has to have a braid.  Cinderella, a bun.  Belle, a half bun.  It is exhausting how many times she changes clothes and hair styles in a day.  The other day she just wanted to be Emma.

Good enough for me, kid.

Don’t make the mistake that these little kids don’t learn how to make excuses at a very young age.  Whenever she doesn’t want to do something that she’s been told, she collapses into a limp noodle in my arms and exclaims,

She’s my little homebody.  She never wants to go anywhere, not even the playground.  Or the store.  She says she’ll just stay home by herself.  The other morning, she looked at me with all the seriousness in the world and said,

On that naked note, Material Girl is playing now and the house isn’t cleaning itself.

Have a great Tuesday! 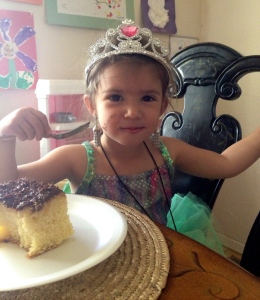 When we drove to a nearby city on Friday, January 27th to check into the hospital to give birth, we thought we’d only be gone a couple of days, and so we prepared for being gone only a couple of days.  But as fate would have it, it turned out to be seven.

J-Dub drove back to our home about 3 times during that week to check on things, get the mail, do a little work, overall, just tend to the things that needed to be tended to.

Of course in a situation like this, a lot of necessary tasks are overlooked for a short time, one of which being the chickens.  We left the chickens out, as is our custom, to free-range the place.  They had plenty of food and water and fresh air.  The day after we returned, I quickly went out to do a head count. Thirteen is the magic number.  But only twelve chickens did I find.  A yellow one was gone.

Naturally, I assumed the worst.  My mind returned to the coyote snatching that occurred a few months ago.  I quickly did a half-way-walk-around-the-place for any signs of demise like a plethora of feathers scattered about.  I checked the horse tanks, as we all know my chickens are fond of nearly drowning in a horse tank.  There were no signs.

I counted my losses, allowed myself a moment or two to grieve, and returned to the house.  Since then, J-Dub’s been penning them up for me at night.  Their range is no longer free.  They are jailbirds, for their own good.

Yesterday evening, a guest speaker was speaking at the church.  J-Dub was asked to play the drums for the praise and worship time.  He didn’t bother to unhook his horse trailer from his pick-up as he would be using it this morning to haul some horses to a nearby town for breeding.  Shortly before the service was to begin, I received a text from my husband informing me that a yellow chicken was in the church parking lot.  Evidently, she had hitched a ride to church in the horse trailer and then flew out once they were stopped.

Fortunately, some friends of ours recognized her and as the music was gearing up inside the church, I can only imagine our friends running around the parking lot chasing a stow-away chicken.

She was captured, trapped, and returned safely to her home later that evening.

I’m glad she’s home, and plus it gives me hope.  If one chicken can hitch a ride to church, perhaps my lost chicken is not dead after all.  Maybe , just maybe, she crossed the road and hopped a train.  Perhaps right now she’s drinking a Pina Colada in Mexico.  Living the life.   I can see her.  Beach chair, sunhat and shades, bikini, sipping on a long straw.  Because, after all, the winter’s do suck here.

My present condition allowed me to find this a tad bit humorous.