She just turned 26 months old.  I know I’m not supposed to do that anymore, you know, count her months.  But I’m just going to make my own rules up as I go.  Time is too precious to just cast it aside and not see every moment for the treasure that it is.

Guess what we did today?

We built a snowman.  Not a real snowman of course.   It’s actually a blustery, warm spring day, not a flake in sight,  but it was her first day to watch the movie Frozen.  Afterwards, she asked if I wanted to build a snowman with her.  “Come on,” she said patting her thigh as if calling a dog,  so of course I did.

She is such a joy.  So smart.  She pretends and plays make-believe all day long.  One minute she’s Cinderella, forcibly kicking off her plastic dress up shoe and saying she better get in her carriage while running to sit in her pink Barbie Jeep, and the next minute she is pouring tea for me and adding spoonfuls of sugar.  She goes on Bear Hunts and squelch-squearches through the mud and peels pinecones apart declaring they are surprise eggs and wonders what’s inside.

We built our snowman today with a carrot nose made from a blue piece of wire found in the yard and two eyes and arms she stuck in the ground.

Her shoes were on the wrong feet, chocolate smudged her lips.

Her dog-ears had long since lost their snugness and flopped haphazardly.

She searched for crickets and got scared by something and ran to my side.

I lay in the grass just watching her and feeling filled to the measure with happiness and joy that she is mine.

Our days are filled with magical make-believe, chocolate kisses and snowmen fashioned from dirt.

It’s been a very long time since my own childhood, but I can vividly remember the games I played with my own imagination.  How magical my world of pretend was.

Watching EK grow and play in this same make-believe way takes me to a place I used to know.  It reawakens a child I used to be.  I remember care-free days where nothing really mattered.

And now all that truly matters is that this little dog-eared 2-year-old (ahem……26 month old) who brings me such joy. 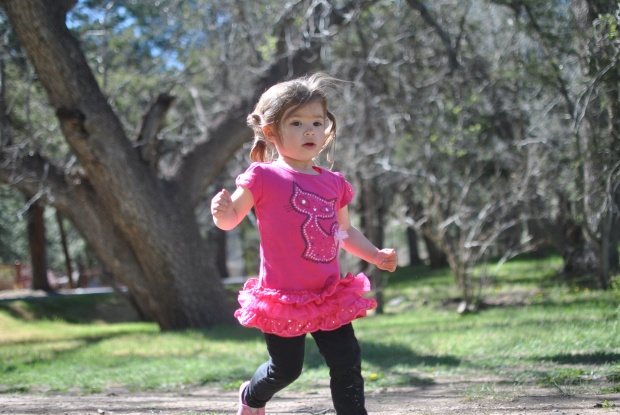 Over the Christmas break my family was treated to the performance of a lifetime by my nephew , I mean Hobo Joe the Magician.

Hand over your wand Harry Houdini because Hobo Joe is in da’ house.

Hobo Joe began with humble beginnings living in a cardboard box that was discarded after Christmas of 2013. But as fate would have it, his wonderful auntie (that would be me) bought him a magic show kit for Christmas and encouraged him to put on a show for the family.

Hobo Joe diligently learned his tricks and was ready for performing the very next day.

Admission was reasonable and well thought out for a 10 year old lad.
General admission—-$1.00
Kids under 4 (his brother and Emma)—free
His grandmother was free, ‘since she’s a senior citizen’, he added.
His dad was free because he owed him four dollars. Now his debt is only $3.
Teenage girls were $5 each. (He had 3 cousins in this category).

He lost his magic wand before the show and even after offering an award for free admission to the person who found it, with no success, he carried on without.

Hobo Joe will not be stopped by something so trivial as a lost wand. The show must go on.

Hobo Joe turned his cardboard box upside down for his table, threw a table cloth over the top, and began the show.

We all assembled to watch his debut performance.

It was the best magic show ever and I honestly can’t remember a time where my family laughed together so much. Truly an experience I treasure.

On a side note, Hobo Joe is no longer living in a box and is saving up for a tuxedo.

Here Hobo Joe is thinking of a number or a color or something that Emma picked.

Hobo Joe poses with a picture with his dad, whose been there for him since the beginning (taken before he lost his wand, obviously). 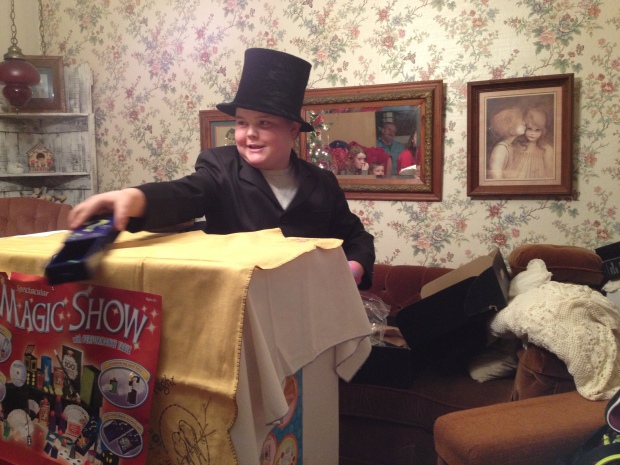